Stories ISB and Beyond

A trio of engineering and volleyball playing friends from the Colorado School of Mines in Golden, Colorado had long since had a dream of sending a payload into space. As engineers they had the technical expertise and organizational skills to perform such a task, but between school, volleyball and part-time jobs, time was at a premium. Joseph Kenrick (ISB Class of 2013), Matthew Rehberg, and Justin Kilb graduated with engineering degrees and moved into the workforce, Joseph in California and Matthew and Justin in Texas, so the dream of outer space remained just that, a dream. Fast forward to early 2020 and, with the disruption to work and regular life created by COVID-19, these young engineers had the time that they needed. With the ensuing quarantine and weekends off, the friends were able to use online video chats and collaborative online environments to bring the project to fruition.

Sending a Camera to Space

The group decided to send a camera to the lofty altitude of 90,000 feet (over 27km!). To accomplish the ascent, the trio concluded that the best method was to use a latex weather balloon filled with helium. Many calculations were needed to assure that the balloon reached the desired altitude without bursting and without ascending too slowly or too quickly. These are engineers we’re talking about, so the calculations were not a problem! With regards to descent, a parachute made of a bedsheet was to be used, the diameter selected to fall at a desired rate of speed. Again, important calculations were used to determine that the project would proceed optimally.

A balloon going straight up only occurs if there is no wind, and in central Texas (it was decided to launch in Trickham, Texas) there is always some wind. Using weather forecasts readily available, Joseph, Matthew and Justin were able to determine when the winds were favorable so that the balloon and camera would not drift away any further than 40 miles from the launch site. 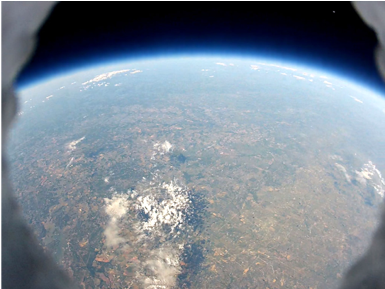 The payload was to be cameras, batteries and a hand warmer mounted into a Styrofoam box with the cameras (yes, multiple cameras) situated so that the lenses were facing outward. The friends made two preliminary tests to determine the optimal number of cameras (it ended up as three) and batteries needed to ensure success (i.e. pictures from 90,000 feet). The problems with the changing altitude included extremely low temperatures and pressure, and many measurements had to be made to better understand what was going to happen to the payload throughout the journey and make adjustments as necessary.

The project was destined to fail if after landing the balloon and cameras could not be found. Thus, a Global Positioning System (GPS) was added to the top of the Styrofoam box. The quirky thing about GPS is that it was not going to work above 20,000 feet, so for some time during the flight Joseph et al were not going to be able to track the path of the flight. There was nothing much that could be done about that, except hope. The group worked within the specific Federal Aviation Administration (FAA) regulations governing their experiment, carefully following the rules and maintaining communication with the FAA in Texas.

The launch took place at 6am on May 2, 2020. The balloon ascended and all seemed to be going as planned. For an agonizing few minutes it seemed the balloon had crashed, but that was just a glitch. After soaring past 20,000 feet or so the GPS no longer took affect and for some two hours there was radio silence. When calculations indicated that the balloon should have been under 20,000 feet, the group headed towards the projected landing site, and 30 minutes later Messrs. Kenrick, Rehberg and Kilb found the payload. Unfortunately, upon checking the cameras, everything apparently turned off 10 minutes into the flight. Disaster?! Not exactly, as the trio had been careful to have two balloons and enough helium to give it another go. Removing some sensors and adding a camera, the guys made some adjustments and hoped for the best. The second balloon was launched at 2pm. Two hours later the ping from the GPS indicated that the balloon had landed, although it seemed that it had settled very close to an oncoming train. Riding in the 4-wheel drive vehicle of a local rancher, the gentlemen found the balloon hanging from a tree just a short distance from the railroad tracks. 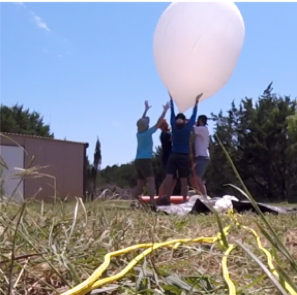 Such an experiment is bound to result in trials and tribulations, moments of frustration and jubilation. Why do such a thing? For these three friends it was about the journey and the memories that were made along the way. Would they do it again? Most definitely! As it turned out, two of the onboard cameras again shut down after 10 minutes, and the third apparently overheated. Nonetheless, see the middle photo below to see what really happened.

Many thanks to ISB alumnus Joseph Kenrick for providing his account of this Covid-19 project. Well done Joseph, Matthew and Justin! 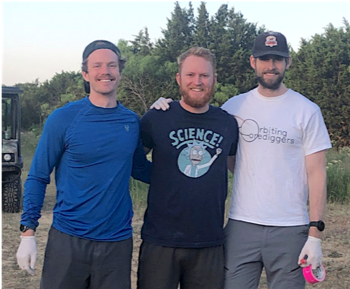