ISB Student Spotlight: Our Young Triathlete Heads to the Olympics

ISB Student Spotlight: Our Young Triathlete Heads to the Olympics

Kieran Tuntivate is a world-class long-distance runner who will be representing Thailand in the 2021 Tokyo Olympics running in the 10,000M event. Kieran, who is Thai-American, is an ISB alumnus as he attended International School Bangkok (ISB) in early elementary school (Kindergarten through grade 2) from 2002 – 2005.

Kieran’s family moved back to Delaware, U.S.A, where he graduated high school in 2015. He went on to Harvard University, where he ran and competed for the Crimson for four years. His achievements at Harvard were many. The highlights being a victory in the 3000M race at the Ivy League Indoor Track Heptagonal Championships while finishing the race with one shoe, being named First Team Indoor All-Ivy League in both the 3000M and 5000M in 2019, being awarded the USTFCCCA Northeast Region Male Track Athlete of the Year in 2020, and being named Harvard’s Male Athlete of the Year in 2020. It must be mentioned that in February of 2020, the senior track and cross country star broke the once unthinkable barrier of four minutes in the mile run by crossing the finish line in a remarkable 3:57.36.

As a Thai-American, Kieran has been able to represent the Kingdom of Thailand in various events the past few years, and his record has been phenomenal. In 2018, while running for Thailand in the Asian Games, he finished fourth in the 10,000M event, while in the Southeast Asian Games in 2019 in the Philippines, he won gold in both the 5000M and 10,000M races. It was in a 10,000M event in February of 2021 in California where his personal best time of 27:17.14 qualified Kieran to participate in the 2021 Tokyo Olympics.

Naturally, all of Thailand and especially Kieran’s alma mater of ISB will be watching with great interest.  Here’s what Kieran has to say about his time at ISB:

"I remember quite a bit about my time at ISB. I enjoyed a lot of the school activities that were put on, such as international students’ day, the student athletics games, and the young triathlon activity. I also remember going to the library after school every day and reading while my brother did homework. Having that resource there and open every day was great. I also remember some of the friends I made who I still keep in touch with today!"

Kieran is currently training in Park City, Utah, with his team, the Bowerman Track Club, to prepare for his next races. He is hoping to qualify for the 5000M for the Olympics as well.  With regards to his training regimen, “training is pretty intense when we come to altitude camp - we run every day, sometimes twice, and go to the gym to lift weights and such every day as well.”

The Olympic Men’s 10000M final will take place on the evening of Friday, July 30th, so get ready to watch hard-working ISB alumnus Kieran Tuntivate represent Thailand and take on the world.

As a school nearing its 70th Anniversary, ISB has alumni all over the world that our students can draw upon for inspiration, guidance, and knowledge. Whether they were with us until graduation or left at a younger age, our alumni remain a part of our school community. As we acknowledge and appreciate the diversity and varying pathways of our current students, along with our past students, we are reminded how important our role is as an international school. We are shaping the lives of these young individuals and preparing them for a multitude of opportunities that span countries, careers, and decades. They could choose between so many different paths, and it is our role to ensure they are equipped with the skills they need to be ready, fulfilled, and grounded. 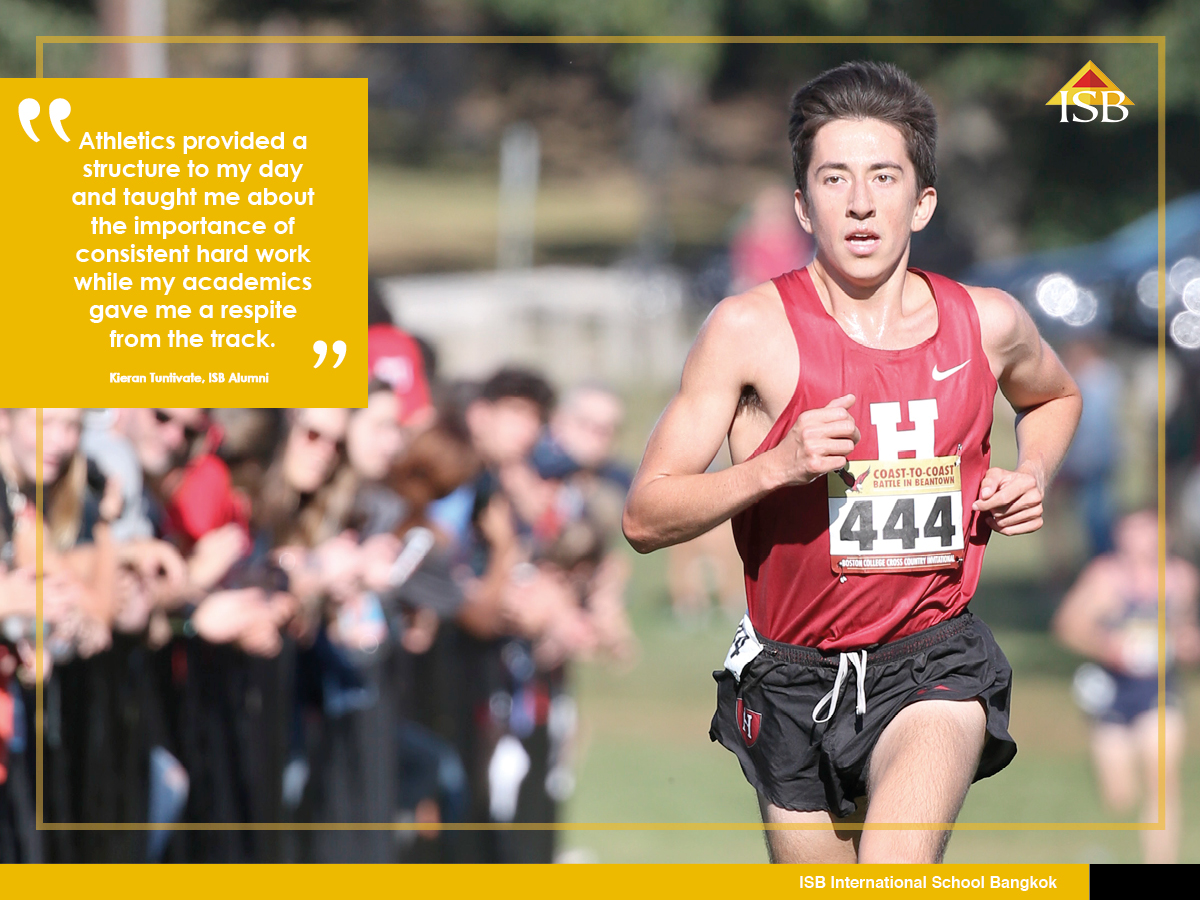